◀ Go back one conqueror   Go forward one king ►

Professor of History, University of Exeter

Frank Barlow’s biography on William II, published as ‘William Rufus’, was printed in hardback by Methuen and University of California in 1983, and paperback in 1990. Yale published the paperback in 2000. The Yale reprint has a new introduction by the author who mentions that he took the opportunity to correct errors and make a few minor improvements. Otherwise, the text is the same as the original 1983 printing.

William Rufus has a big act to follow - his more famous father. Professor Barlow however stresses that he was a true English king and the real consolidator of the conquest, a task cut short by his early death. Earlier times, especially the Victorian era, disapproved of his morals and character. This should no longer be the case he argues and presents the views even of his critics that his rule is worthy of the highest interest and importance. In his teaching days at Exeter Professor Barlow offered several times the reign of William Rufus. He reports that without exception his students disliked Anselm and almost without exception liked Rufus. Readers of this book will no doubt find the same.

J.O. Prestwich (The Queen's College, Oxford) reviewed the book in The English Historical Review, Vol. 99, No. 393 (October 1984). Prestwich opens his review by comparing the existing view of William Rufus, as defined by the century old text ‘The Reign of William Rufus’ by Edward A. Freeman, in whose view he was "an evil man and an evil king: he combined the foulest forms of vice”. Barlow has a very different version of the king in this "work of fine and exhaustive scholarship full of sympathetic insights and shrewd judgements”. He finds that Barlow’s description of William stresses the theme of continuity with the past in the still new Norman regime. Rather than judge William on Victorian values, Barlow assesses Rufus “...by the standards of the contemporary nobility whose interests he shared.” Barlow’s mission is to understand rather than to judge, although as Prestwich comments, “the discouraging conclusion is that in the lack of hard evidence this aspect must remain something of a mystery."

C. Warren Hollister (University of California) wrote in Albion, Vol. 16, No. 4 (1984) "Reading this splendid book, one is struck repeatedly by the astuteness of Barlow's interpretations, the persuasiveness of his reconstruction of motives and events, and the ease with which he commands the historical evidence." Hollister's comments are particularly important because he was the author of the English Monarchs biography of the subsequent king, Henry I. Hollister, though, did offer the comment that Barlow's view of Rufus was a little too forgiving in his dealings with Archbishop Anselm and that he did not share the view that the king was as reasonable as Barlow portrays in his differences with a so-called stiff-necked Archbishop.

Professor Barlow also wrote the biography of Edward the Confessor in this series and he would go on to write a further notable biography on Thomas Becket, published by Weidenfeld & Nicholson in 1982 which is still available in paperback. See this link.

See the following page on Henry I for a citation of a biography of Robert Curthose, Duke of Normandy after William the Conqueror and the elder brother of William Rufus and Henry I. 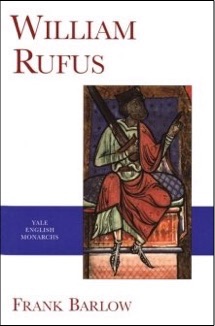 The Yale cover is credited as coming from a miniature portrait, 13th Century, held by the British Library