‘William the Conqueror’ by David Bates was released in the English Monarchs series in October 2016 (UK) and January 2017 (USA) which keen-eyed readers will recognise is the anniversary of the 950th anniversary of the Battle of Hastings. The 1964 biography of William by David Douglas was retired from the series, although appears still to be in print.

In 2016 it was too early to tell if readers might expect old titles to be deleted from the list as they reach an advanced age and to be replaced with modern equivalents by more recent historians. Since the Bates biography of William several Methuen titles have been replaced or announced. See the page of books by publication date for a list of the age of the titles in the series and the likely candidates to be replaced. Note that the James I title has already been deleted, but not yet replaced.

This newly released book on William is based on Professor Bates 1989 book (with two revisions in 2001 and 2004) first published by Tempus Publishing (The History Press). This new Yale book is extensively reworked and in all regards a new title and the culmination of the author's scholarship. This book shares with John Gillingham’s Richard I the rare distinction of being a new book based on earlier work rather than an existing title promoted into the series. This book was one of five Yale titles listed in this website which were released in 2016. In publication order, the biographies of Henry IV; Louis the Lion; Henry the Young King; Æthelred II and William the Conqueror were issued.

In the prologue Professor Bates gives the reasons for the new history of William for the English Monarchs series and offers the comment that much of what was written by Professor Douglas in 1964 is still relevant, and in this new work he seeks, as did Douglas, to bring closer both English and French studies of William.  He states in the epilogue that the book’s basis “...was always the proposition that, by locating its subject within cultures and context, it was possible to proceed from the individual to an understanding of his or her life and its historical significance.” He states throughout the book his desire to avoid historiography which is a barrier to understanding. The author’s pen is never sharper than in the final chapter and the summary. In these two chapters Professor Bates turns the book into a lectern where he uses piercing analysis to describe the difficulty in throwing light on William’s character and the unique culture of his cross-channel empire.

In History, Vol. 75, No. 245 (October 1990) Marjorie Chibnall (Clare Hall, University of Cambridge) reviewed an earlier iteration of Bates’ study on William, concluding that while the work had much merit, she hoped that “…in time David Bates will produce the deeper and more fully documented biography that will adequately replace that of David Douglas. His Yale book twenty-five years later would have pleased her very much. Christopher Macdonald Hewitt (Western University, London, Ontario, Canada) wrote in The Journal of Historical Geography 59 (2018) finding only some minor flaws in "this work of overwhelming strength”, meticulous research, a thorough use of ‘signposts’ throughout indicating to the reader where the narrative is going, and a solid geographical context regarding the places in William’s life.”

This book is reviewed by Judith Green (University of Edinburgh) in History, issue 351 (Volume 102, July 2017) in which she says the book is "...a very considerable achievement, moving historical debate forward" and that "...William's biography is always going to be peculiarly challenging. Bates has tried to be even‐handed, summarizing a mass of scholarly debate whilst remaining engaged with the circumstances of an individual life." 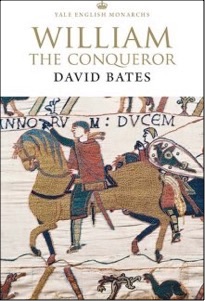 Cover: From the Bayeux Tapestry. The cover is an early scene showing William riding out to meet Harold who has been brought to the meeting.

Heather Pagan (Aberystwyth University), writing her review in French Studies: A Quarterly Review, 2017, Vol.71(4) acknowledging at the outset that this book "represents the culmination of a lifetime of careful scholarship" adding that the book will "...deservingly, become the standard reference work for all future work on the Anglo-Norman realm as well as a model for biographies of medieval rulers."

Emily Zack Tabuteau (Michigan State University) comments in the Journal of British Studies, 10/2017, Vol.56(4) that "For the reader wishing to follow the story of William’s life from beginning to end, this is a breathtaking achievement. For the researcher wishing to consult the book on some particular point...the exclusively chronological method will cause problems." In this she finds the index to the book unhelpful in finding recurring themes.

Mark Haggar (Bangor University) in The English Historical Review, Volume 133, Issue 563, August 2018, also finds the chronological approach has limitations, citing one example: "William’s relationships with the contemporary French kings and popes, for example, are discussed at intervals throughout, but the overarching picture proves difficult to assemble." He finds these minor reservations though, stating that this book "...has significantly advanced our understanding of this imposing figure, and it will, and should, be the point of departure for future discussions of the reign."

For those hesitant to acquire this new title by Professor Bates, perhaps because they own the well-loved David Douglas standard, be assured that David Bates has impeccable credentials. He has held senior posts at the Universities of Exeter and Glasgow, been Director of the Institute of Historical Research in London and most recently Professor of Medieval History at the University of East Anglia. Throughout this has been a leading Norman and Anglo-Norman historian. Although a long book even by the standards of this series, an attentive reading is required and and probably a re-read to absorb the carefully teased out narrative. As for most of the very early kings the records are scant and require careful treatment. As you would expect from a book in this series, this is what the author delivers.

Mirroring the performance of Professor Douglas, David Bates presented his research into William at the Ford Lectures in 2009/10 which was later published as his biography of William, celebrated on this page. Professor Bates, by the way, was a student of Professor Frank Barlow whose Edward the Confessor graces the English Monarchs series.

At the risk of sending readers scurrying to bookshops on further quests for purchases, one of David Bates’ other achievements is to be the founding editor of the Medieval World Series (published by Longman then subsequently Routledge). The first title was published in 1992 and the series is still in progress. These titles are an introduction to the authors’ areas of expertise and a summary of the current scholarship on the topic.

David Bates acknowledges Dr. Robert Baldock as the commissioning editor and its supervisor at Yale. The book was commenced at his suggestion in 2000 and took sixteen years to see print.

Finally, this book was published in French as ‘Guillaume le Conquérant’ by the Paris-based publisher Flammarion in 2019 in what seems to be a series of significant French biographies from this publisher called ‘Grandes biographies’. This is a series of studies of prominent French-speaking people, though probably not Saladin (a 2016 addition). ‘William the Conqueror’ joins a select number of English Monarchs books or our self-styled ‘Companion’ books to have been translated into another language.