Michael Prestwich’s book in the series, on Edward I, was released by Methuen, University of California  and also Guild Publishing in hardback in 1988 and paperback in 1990. Yale published the paperback and hardback with some corrections to the text by the author in 1997. In the acknowledgements page Professor Prestwich mentions that the first writer assigned to this biography was Professor Harry Rothwell, Emeritus Professor of History at the University of Southampton, who died in 1980 while work on the book was at an early stage. Prestwich notes that Rothwell’s wife gave him access to the unfinished manuscript, “from which I gained valuable insights”. Rothwell's other contribution to the series was an acknowledgement by W.L. Warren in the preface of his 'King John' in which he thanked Rothwell for the loan of his translation of Magna Carta he made for his volume of 'English Historical Documents' (volume 3, which appeared in 1975).

In his preface Michael Prestwich reminds the reader of the difficulty of writing a linear narrative of Edwards’s life. He points out that Edward’s reign had many strands and may simultaneous pressures. Therefore Prestwitch adopts a thematic approach for much of the book to present “...a clearer view of the problems Edward faced”, apologising to a reader expecting otherwise. Notwithstanding that, the chapters are organised in a broadly chronological way, with the book in three parts: The Heir to the Throne; The King in his Prime; and The Later Years.

Edward’s life is eventful, vigorous and long; from a violent youth to European statesman. Professor Prestwich provides the series with a true classic and one that is still the ultimate work on Edward I. The Yale printing adds a new introduction by the author and updated bibliographic guide. In the introduction Professor Prestwich stresses that he did not set out to write the definitive account of Edward (although readers would suggest he achieved this) and that important research on the reign has occurred since 1988. Although he does not attempt a summary of this work, he does single out some outstanding contributions to Edwardian scholarship.

J. Beverley Smith, (Emeritus Professor of Welsh History, University of Aberystwyth) reviewed this book in The Welsh History Review, January 1, 1990; 15, (1). Smith starts the review acknowledging that Prestwich was “exceptionally well equipped to embark upon this amor biographical study” and that is is a judicious account of Edward, wary of doctrine and careful to consider previous views of Edward and “generous in its acknowledgements of their existence”. Highlights for Smith are the chapter on the government of England, the legislation of the reign and the role of parliament. The author is found to have a measured approach, yet comprehensive and reliable. Smith concludes that in his estimation “The volume will remain for a long time the cornerstone in the study [of Edward I]” and that it is a “...work of thorough and objective scholarship."

Fred A. Cazel Jr. (University of Connecticut) reviewed this book in Speculum, Vol. 66, No. 1 (Jan., 1991). He welcomed it as a badly needed update to the previous standard work by Sir Marucie Powicke of 1947. Once again, an English Monarchs book is described as the new standard work. "Because of its scholarly excellence, it will supercede all its predecessors and rapidly become the standard work on the reign."  He adds, but not in disappointment, that the book does not restore Edward I to the position of greatness "...that has been taken from him by twentieth-century historians." Even with the careful analysis by Prestwich the view of Edward is that the king had both successes and failures. "These questions about the judgment of Edward's greatness, it is to be emphasized, concern not only Prestwich's book but the whole modern interpretation of Edward I and his reign."

Lastly, Professor Prestwich has recommended highly a recent biography of Edward’s queen, ‘Eleanor Of Castile: The Shadow Queen’ (2014) by Sara Cockerill. The publishers have used his complimentary review on the rear cover to promote the book. As Eleanor appears only briefly in his own biography of Edward I this book therefore is essential for further reading of Edward’s reign. 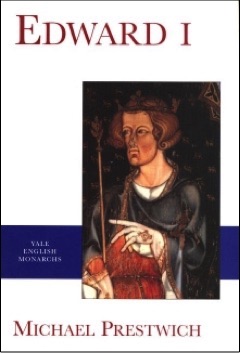 Cover: The Methuen cover shows a miniature from a thirteenth-century manuscript, cited as Cottonian Library MS Vitellius A XIII, f.6v and held by the British Library.

The Yale cover shows detail from a portrait of Edward in Westminster Abbey.

Buy Eleanor Of Castile from Amazon