It was reissued in paperback by Yale in 1999 with a new introduction by Ralph Griffiths (Swansea University) as he did for Professor Ross’ book on Edward IV. How does one approach a biography of this king? Discussions of Richard III even today raise passions among his advocates and his critics. The spectacular recovery of his remains and his reinterment showed the world-wide interest and Leicester’s local pride in Richard. Ralph Griffiths reiterates this point in his Yale edition introduction about the intense interest in Richard from all observers and calls the Charles Ross book brave and self-confident - and “the most compelling portrait of the king and his actions”. Griffiths also mentions that Ross was, like Richard, a Yorkshireman and fully aware of Richard’s northern life and affiliations.

Even in the late 1970s when Charles Ross was preparing this title the battles were still being fought in print. In his acknowledgements page Ross states his intention to avoid writing a conventional biography. He sets out his plan to provide a thematic approach, “in an effort to see Richard in the context of those aspects of his life and reign which mattered most to Richard himself and his contemporaries”.

One of the joys of reading Charles Ross is the footnotes. If you choose to read this book, or his Edward IV, be sure to read his pithy notes and, in this volume particularly, his dismissal of the emotional and excitable approach given to this topic by Paul Murray Kendall in his 1955 biography of Richard III.

In his long thirty page introduction Ross moves through the history of views on Richard, starting with a playwright from Warwickshire and then up to modern times, laying the groundwork for an intense yet brief analysis of Richard’s reign. This is not a long book by English Monarchs standards, but neither was Richard’s reign. In its 229 pages of text Ross covers every aspect of Richard’s life and two years as king. This book is a masterful weaving of views and analysis on perhaps the most impossible terrain for English historical study.

Ralph Griffiths reviewed the book in The English Historical Review, Volume 98, No. 387 (April 1983) an found this an absorbing biography by the "undisputed authority on Yorkist politics” in which he “...skilfully isolates significant elements of historical fact in the classic portrait of Richard the arch-villain; this tradition is shown to be an embroidery (but not a serious distortion) of a commonly-held view of Richard during his own reign.” The man that emerges from the myth, Griffiths finds is “a complex man, neither arch-villain nor maligned monarch” and on Richard’s defects he reports that Ross speaks plainly. “He was a ruthless, arbitrary and violent king who exhibited a distressing lack of principle and a willingness to resort to secrecy and dissimulation to gain his ends.” He concludes that the book is "a balanced re-examination of a subject that generates strong passions. It is a tribute to Dr Ross's skill and relentless common sense that he is able to distinguish unerringly between what is well established and what is still unresolved.”

Charles T. Wood (Dartmouth College, Hanover, New Hampshire) wrote in Speculum, Volume 59, Number 1 (1984): "Ross's cautious sanity and patient willingness to weigh the opinions of others insure that students of the period will long have to wrestle with his interpretations before presenting new judgments. Still, one suspects that those new judgments will be made, for even though Ross's volume appears in California's English Monarchs series [sic.], it is far from being a complete or full-blown biography. It concentrates not on narrative, but only on those themes which Ross believes can best place Richard in proper fifteenth-century con- text." He adds an important observation that "Ross has a different view of which political attitudes and opinions to see as important, and in this view what count are not Richard's traditional crimes, but rather his overreliance on northerners, men whose uncouth ways antagonized the south, and an ineffective use of patronage, which failed to increase his base of political support. And it is here, too, that the book makes some of its freshest contribution". He finds Ross, ultimately, persuasive, but concludes that Ross' account is not the full story.

Neither was it the final word on Richard III from the English Monarchs series publisher. See the following page in this website linked above on the 2019 Yale biography by Michael Hicks. 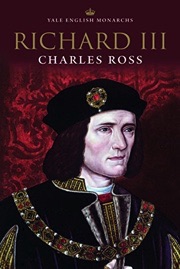 Cover: The exceedingly dull image used in the original Methuen printing sidesteps the obvious candidate - the famous portrait of Richard held by the National Portrait Gallery of the subject fiddling with his ring, which is used in the subsequent printings by the University of California and Yale. Yes, the fridge magnet of this is available.

The image used by Methuen and UC in the early printings is credited to the Rous Roll by John Rous, held by the British Library. It shows Richard with the white boar at his feet and surrounded by the crests of his domains.