Go to the next Companion Book to be published by Yale

The forty-year-old Charles Ross biography of Richard III is not the last word on this king by Yale. The publisher has issued a new study of Richard III, written by another prominent historian of the period: ‘Richard III: The self-made king’ by Michael Hicks. The author is Emeritus Professor of Medieval History at the University of Winchester and an eminent writer of the period.

Professor Hicks is a biographer of Edward IV (Bloomsbury Academic, 2004) - for the ‘Reputations’ series (2000-2008). He has also written a biography of Richard's queen Anne Neville (History Press, 2006); Warwick the Kingmaker (Wiley-Blackwell, 1998); and Edward V (The History Press, 2003) - which can be viewed in the link to the previous king at the head of this page - and many other books on Fifteenth Century history. Richard III is not his first book for Yale. Previously published was 'The Wars of the Roses' (2010), which generated positive reviews from A.J. Pollard, Helen Castor, Anthony Goodman, Desmond Seward, and English Monarchs author Mark Ormrod, all names known to serious history readers. Dr. John Watts (University of Oxford) in his 2012 review found the book both thought-provoking but with some limitations.

Additionally, Professor Hicks is already a biographer of Richard III. This earlier biography of Richard was published by Collins & Brown in 1991 (and reissued by Tempus/The History Press) where his focus, as in the 2019 Yale book, was on "Richard's reputation during his lifetime" and the trajectory of his reputation since then. Hicks employs his training by K.B. McFarlane to consider the subject of the book in terms of his own time not, as many lesser historians do, consider a person living in the distant past on modern-day expectations.

The author describes this new book in his preface: "This is not a study of Richard's life and times, still less the comprehensive and rounded analysis of the reign that Charles Ross achieved, nor indeed a pre-history of the Tudors. It is an account of the formation and activities of Richard the man. It is a more direct biography that deploys all the evidence." He adds also that "The foundation for modern study remains Charles Ross' Richard III, now almost 40 years old but still fundamental and not superseded here." Not noted anywhere in the book is the editor, which is unusual for a Yale book. Heather McCallum has indicated elsewhere that she was the editor of the book.

Yale’s publicity describes this new book on Richard III as “The definitive biography” and reiterates the accolade bestowed by BBC History Magazine that Professor Hicks is "the greatest living expert on Richard", although the book itself was not published in the series. On face value the evidence is ambiguous about the book being in the series or outside it: there is no series attribution on the cover, although this is the usual place for such a credit only for paperbacks; there is no mention of the series in the Preface; there is no mention on the dust jacket flaps or the rear cover. What is present is a list on the page opposite the title page stating "Also in the Yale English Monarchs Series". This is a puzzle because the book is not listed in the series on the two Yale websites (UK and USA) nor mentioned as being in the series in the book's page at these websites, nor indeed in books within the series and published after Richard III. Neither has Yale retired the 1981 Charles Ross biography of Richard - it is still on sale and credited as a series book on Yale's website and in post-Hicks' Richard III releases. This indicates that Yale was not preparing to retire the Ross book. The question about having two books in the series on one monarch was raised on an earlier version of this page. This proved not to be the case with Richard III, although in the August 2020 release of the new Edward the Confessor two books on this king were listed as being in the series simultaneously: both the 1970 Frank Barlow biography and the 2020 Tom Licence biography.

Cover: The cover is a portion of one of the two oil painted portraits of Richard held by the National Portrait Gallery, London. It is reproduced in full (although in black & white) inside the book.

On the rear dust jacket flap credit is given to Jeremy Hopes for the design. Hope is a British freelance graphic designer whose other work, including the covers of Matilda and Æthelred, can be seen at his website.

Link to the book at Yale

The subsequent English Monarchs titles, Henry III (2020) and Edward the Confessor (2020) did not list the Hicks Richard III in the series. This status is unlikely to change and we will observe Richard III by Professor Hicks as a ‘Companion’ to the series, a continuation of the work of Charles Ross, and a companion to the series. In this case it is a Yale English history book more honoured in the breach than the observance. This website is using the term 'Companion books' for biographies not in the series of individuals who were consorts, regents, in line of succession, contestants or shared the throne - or in this case a king.

Readers now have a choice of two fine Yale biographies on this king and with different missions; Hicks has a depth of knowledge on the subject and familiarity with the latest research about Richard. Ross stated that his aim was to synthesise all views of Richard, to comment on the veracity of each aspect of commentary on Richard and to tell the story of his rise and fall. With the publication of this book Michael Hicks joins Charles Ross as a contributor to Yale's Ricardian scholarship and we are fortunate to have both. Indeed, the connection is closer than that suggests: Michael Hicks studied under Charles Ross for his final undergraduate year, marking out this new book as building on the work done by Ross.

Professor Hicks is the most recent of Yale English history author to have a Yale book published after several earlier biographies; this is the culmination of a lifetime's research on a topic, using the growth of understanding and scholarship to craft the work to the pinacle of the profession. It is common, too, for academic biographers to have built their work through research published in professional journals, although this work is not seen by the public and not easily accessed. Recent additions to the series by Timothy Bolton (Cnut the Great), David Bates (William the Conqueror), and W. Mark Ormrod (Edward III) - to name a few - have shown that the English Monarchs series is seen by these eminent scholars as the place to have their most important works repose.

This new book by Professor Hicks confirms a developing trend of Yale refreshing the series' titles as the opportunity arises. This commenced in 2016 with the new David Bates study of William the Conqueror replacing the 1964 David Douglas book and continues into 2020 with' Edward the Confessor'.

The spine of Richard III has an addition which shows great attention to detail. Under the vertical book title is a decoration which is copied from the badge or brooch on the cap Richard is wearing in the National Portrait Gallery image used on the cover. The book's cover has an abbreviated portrait of Richard. This is the less well known and more naïve Ricardian portrait of the two in the National Portrait Gallery in London. In recent years not a few publishers have adopted this curious style of centering the image on the chest of the portrait, chopping off the heads of the subjects, as it were - see most of Ian Mortimer's history books for example. The full image is included inside the book opposite page 244 in black and white. The colour cover image has an attractive yellow which is  replicated on the endpapers when the book is opened; a thoughtful piece of design.

This title was the third book in our study of the English Monarchs series to have been released in an unabridged audio format. In December 2019 Trantor Media published both a CD (mp3 format) and a digital download. The cover art on the audio versions is the same as the Yale paper releases, although amended for the square CD case. The downloadable version was made available by digital media companies Audiobooks. The book is read, or "narrated" by Matthew Waterson. The duration of the audio is eight hours.

The hardback was published in 2019 after the companion book Matilda and between the English Monarchs series books Cnut the Great (2017) and Henry III (2020). The paperback version of Michael Hicks' Richard III was released on 22 June 2021. The cover is ever so slightly different; the closest the series has come to playing 'Spot the Difference'.

This YouTube "video" is a 2013 audio interview of Professor HIcks conducted by some of his students, in which he discusses his career, writing, archeology and Richard III. 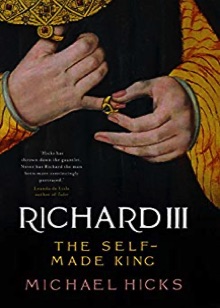