Link to the book's page at Yale

◀Go back one ursuping cousin      Go forward one Angevin king ►

Go to the next companion book published by Yale

Matilda is one of England’s - and Europe’s - most interesting women in history. Her story is usually told as part of that of her cousin Stephen who seized the throne when she was the legitimate successor to her father, Henry I. Despite her prominence in European and English history, Matilda has only rarely been placed in the centre of an account of the 12th Century. We are fortunate to have a magnificent account of her life where she is rightfully placed centre-stage: ‘Queen Consort, Queen Mother and Lady of the English’ (1991) by Marjorie Chibnall (1915-2012). This book is of the standard of academic rigour one would expect from an English Monarchs title, but it was published by Blackwell, not Yale, and nearly thirty years ago.

An update to this account of Matilda’s life has been published by Yale. This new biography of Matilda is written by Catherine Hanley, the author of the recent study of Louis the Lion in her book ‘Louis: the French Prince Who Invaded England’ (2016). Her 2019 biography of Matilda is the sixth so-called ‘Companion’ book to the English Monarchs series. The paperback was published in February 2020.

Hanley’s book on Matilda has similarities to the author’s book on Louis. Both stories are accounts of a failed military campaign to acquire the throne of England; both contestants felt they had a legitimate claim; and both failed to secure the crown. The difference is that Matilda had the superior claim to her challenger/usurper and her campaign continued for seventeen years, not seventeen months as in the case of Louis. In the end she lost the battle, but prevailed over Stephen by negotiating for her son Henry to become Stephen’s successor. Her story is of a much greater magnitude and lasting influence.

In her introduction Catherine Hanley quite rightly notes that Matilda has been largely ignored in print, while her male contemporaries have been the subject of many studies. She states that her aim in writing the book was to fill this gap, to “bring into the spotlight” a central player in the events of her time. The author acknowledges the 1991 biography by Marjorie Chibnall, commenting that her book “does not seek to replicate Professor Chibnall’s work, but rather to contribute to an ongoing debate by providing a new and different interpretation of Matilda’s character and actions, taking advantage of the large amount of scholarship that has been published on the twelfth century and on twelfth-century sources since 1991." She further separates these two outstanding books on Matilda by categorising Chibnall’s work as one written for an academic audience, already familiar with the period and personalities involved, while her own book is written “to inform those who are perhaps less familiar with the subject about Matilda’s life and times in an accessible - and hopefully engaging - way.”

Sean McGlynn (lecturer at Plymouth University, Somerset), an historian who has written about the invasion of 1216 himself, reviewed this book in The Spectator, 23 March 2019, commenting, "This is excellent and reliable popular history, confidently relating the dramatic, compelling tale of a remarkable woman in remarkable times, even if her role as a 'warrior' was perforce limited. It is a shame that there are no endnotes, as one would normally expect from Yale, but this volume is designed for a wide readership and deserves to find one." 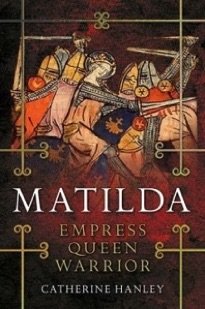 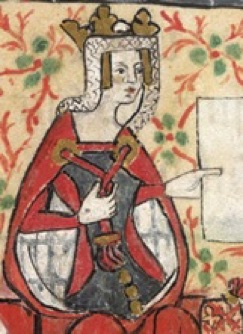 A 15th Century portrait of Matilda from "History of England" by St. Albans monks and held by the British Library.

Cover: Credited in the book as being from a manuscript held in Koninklijke Bibliotheek, (The Royal Library of the Netherlands), The Haguue.

On the rear dust jacket flap credit is given to Jeremy Hopes for the design. Hope is a British freelance graphic designer whose other work, including Æthelred and Richard III, can be seen at his website.

In The Guardian of 11 April 2019, Kathryn Hughes, a biographer and novelist, wrote that Hanley has made "a fine job of making the case for Matilda as a far more autonomous figure than historians have previously suggested...Hanley makes us see what a bold move it was for Matilda to claim the crown for herself".

This title was the second book in our study of the English Monarchs series to have been released in an unabridged  audio format. In April 2019 Trantor Media published both a CD (mp3 format) and a digital download and it is available both in the UK and the USA. The cover art on the audio versions is the same as the Yale paper releases, although amended for the square CD case. The downloadable version was made available by digital media companies Audiobooks and Audible. Audible is owned by Amazon and the link for Audible can be found at the book's Amazon page. The book is read, or "narrated" by Jennifer M. Dixon. The duration of the audio is thirteen hours.

In the publicity for the book in 2019 the author told the story of Matilda in the History Extra podcast of 22 February 2019. The thirty minute audio can be accessed here.

This new work is an important addition to Yale’s studies of English and French history, and equally a very welcome update of Marjorie Chibnall’s important work from almost thirty years ago. Matilda’s story needs to be told well and often. This new Yale book ensures that for another generation or so the public will have the opportunity to read the other half of the story of the battle for the crown of England between the first two English kings called Henry.