Go to the next king without a book in the series

An English Monarchs book on Harold has never been promised. In comparison to other kings, Harold Godwinson (or sometimes Godwineson) has been overlooked by academic biographers doubtless because of his brief reign and his famous defeat by the Normans. Although any examination of the conquest and William will include Harold, his part in such an account of 1066, and the events up to the conquest, has to be secondary to William. In the Douglas biography of William the Conqueror Harold barely rates a mention and his life is discussed in one chapter, and mostly where it intersects with William. Readers who have Professor Barlow’s ‘Edward the Confessor’, or either of the two English Monarchs William the Conqueror titles - by David Douglas or David Bates - will find an adequate summary of Harold included, but it will leave the reader wishing for more detail. Some of this detail can be found in Barlow's study on the Godwin dynasty in his book 'The Godwins' (Longman, 2001). The climax to the book is Harold's ascent to the throne. Barlow's study illustratres the importance of this family in the polictics of Edward's reign and why Harold was in a position to become king. Barlow shows that Harold was born great, rather than had greatness thrust upon him.

In lieu of an English Monarchs book, two well-regarded biographies are available where Harold is the focus, should the reader wish to have a Harold-centric account of England in the middle of the Eleventh Century. ‘Harold: The Last Anglo-Saxon King’ (1997) by Ian W. Walker is highly recommended as a substitute for an absent Yale text. It carefully examines Harold’s role and position in the English court of Edward the Confessor, his assumption of the crown and the events in England during 1066. It still can be found both in hardback and paperback at an affordable price. Additionally, ‘Harold II : The Doomed Saxon King’ (2005) by Peter Rex is available as a hardback and paperback. Peter Rex has written other studies of the era, the most notable of which are those on Edgar the Peaceful, Hareward the Wake and William the Conqueror.

Emma Cavell (Department of History, University of Tasmania), reviewing Walker’s book in Parergon, Volume 16, Number 1, July 1998, described it as “...the first much-needed academic biography of Harold Godwineson”, but also comments that Walker sets his aim at recreating a positive image of Harold as an English hero largely from English sources rather than the more common portrait of him inherited from Norman and later sources. She concludes that the book is “...essential reading for all historians of the Norman Conquest” and that it succeeds in demonstrating that Harold deserves his place in English history.

You might find in some forums that the Peter Rex title is listed as part of the English Monarchs series. This is incorrect. The book is published by Tempus Publishing (The History Press) and is definitely not a Yale English Monarchs title.

However, not all hope is lost for an English Monarchs King Harold study. Yale has refreshed the Conqueror's biography; a new Edward the Confessor will be published in August 2020 written by Tom Licence, a new contributor to the series; and an exciting new find in 2019 of two and a half thousand coins from 1066 have reinvigorated interest in Harold. While these finds will have come too late for the Licence biography of Edward they will surely underpin any future study on Harold's brief time as king. There has never been a more propitious time for a Harold Godwinson book. Edward the Confessor and William the Conqueror have their new book. It's time for a book on the king in the middle.

An arrowing experience for Harold.

An 11th Century image of King Harold from a well known work, currently held in Bayeux.

There has always been debate about the manner of Harold’s death. 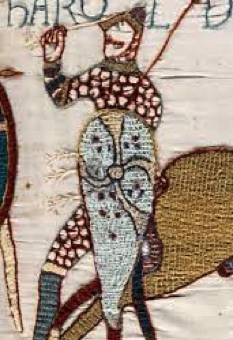 No book published - See Edward the Confessor or William the Conqueror