William and Mary are the last monarchs without a book.

Go to theories about what is coming next.

William of Orange and Mary Stuart almost had their English Monarch series book. It was promised as early as the publication of the fourth book in the series when it was listed on the back cover of Edward the Confessor in 1970. This was to be ‘William and Mary’ by Graham Gibbs   but it proved to be one of the cancelled books. Graham Gibbs taught at Birkbeck College London, was Reader Emeritus in History at the University of London, and was active in history scholarship in the 1960s and 1970s. He wrote articles predominately for academic journals and his specialty was British foreign policy in the early Eighteenth Century as well as the Huguenot contribution to the intellectual life in England and the Dutch Republic. Gibbs published at least two further works: one with Gibbs as a contributor to a 1985 conference on the Huguenots, and a University of Cambridge publication dated 1991. The latest published presence for Gibbs found was a review for War In History Volume 9, number 1 written in 2001 of 'The Anglo-Dutch Wars of the Seventeenth Century' by J.R. Jones. This was written under the name G.C. Gibbs, possibly to distinguish his name from another Graham Gibbs at the University Huddersfield who is a mathematician and computer scientist, not a likely candidate for writing an academic text concerning the Seventeenth Century. Gibbs was also given acknowledgement by John Miller for assistance in his biography of Charles II (Weidenfeld & Nicolson, 1991). Beyond that no trace of Graham Gibbs the historian could be found.

While William and Mary have been short-changed when it comes to biographers one title is likely to appeal to readers of the English Monarchs series: ‘William and Mary’ by Henri and Barbara Van Der Zee (1973). This book was reprinted in the UK by Penguin in 1988 as a paperback to mark 300th anniversary of the accession to the throne of William and Mary. This isn’t an academic text, but does display solid research and has the advantage that the authors had access to documents not just in English but in many European languages, crucially Dutch. Henri was know to be fluent in five languages and this is reflected in the multi-lingual bibliography in the book.

Henri Van Der Zee (1934-2013) and Barbara Griggs (dates unknown - even the British Library has no birth year for her, which is unusual) were journalists who met in London when Henri re-located there after leaving the Netherlands. Their book, whose authorship perfectly mirrors the joint reign of William and Mary, is still the most informative and readable biography of these two monarchs. Although not historians by profession, the Van Der Zee’s tell in referenced detail and in over 500 pages the story of this neglected late-Stuart reign. Barbara Greggs is still writing, authoring books on health and herbalism and, according to her publisher, lives in London.

'William and Mary' is long out of print but can be found easily enough from used book vendors on the internet and is highly recommended. It comes in two versions: The original British edition by Macmillan and the simultaneously published American edition by Knopf.

The Knopf edition from Amazon USA or ABE

The Macmillan edition from Amazon UK or ABE

The Penguin paperback from Amazon UK or ABE

The Dutch language version from Amazon UK or ABE 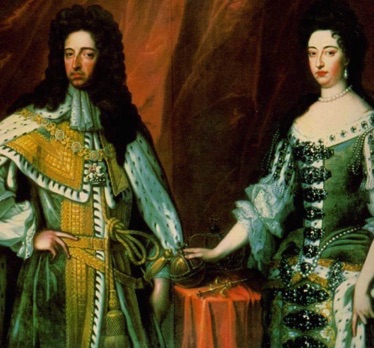 William and Mary in a composite image copied from a set of paired portraits dated 1690 (see here and here) from the studio of Sir Godfrey Kneller (1646-1723). These images were widely copied and sent around Europe. The portraits are held by The Royal Collection Trust at Windsor Castle.

Appropriately, this book was translated into Dutch for a 1975 hardback release called 'Willem en Mary' and published in Amsterdam by H.J. Paris; ISBN 9789060061657.

‘William and Mary’ was reviewed by Stephen B. Baxter (University of North Carolina) in The American Historical Review, Vol. 79, No. 1 (February 1974) in which he gives the book mixed reviews, rather sourly commenting that this book has been written by journalists rather than academic historians, and he complains that there is too much of Mary in the book. He says it is a book written with engagement and warmth, but that there are problems with accuracy of basic facts. He feels that the focus is Mary, her hopes, fears and religious beliefs while William’s portrayal is less successful because “…they avoid any deep consideration of military, diplomatic, administrative or political matters” to which William devoted his life. He suggests, in a derogatory tone, that it should instead be called a biography of Mary and William, and complains that the inclusion of Mary as a subject of the biography makes the book "...curiously feminine in character and outlook, like the woman's page of a daily newspaper". This 1974 view of the joint reign would not be tolerated in the 2020s, but his general point about it being a popular history rather than an academic text is valid enough.

The space given to Mary in this book has ensured that modern readers, well acquainted with the 'old school' practice of denying the contribution of women in historical events, will appreciate that William wasn't the only important player on the world stage, among the Dutch, in the revolution of 1688 and the joint reign which followed in England. It's a characteristic of the book that will give it durability and value into the future, not something that every book from 1973 will share.

The reviewer asks the very good question why that journalists and popular historians succeed in writing history (in 1974) despite the errors which professional historians would avoid. “The simpler answer is that we no longer care to communicate with nonspecialists. And that is stupid of us, for if we refuse to write history, the amateurs will halve a stab at it…And if we make ourselves write as well as the van der Zees do, there will always be an audience.”

Baxter wrote his own biography of William III (Longmans, 1966) - which largely excludes Mary - and remains one of the few academic biographies of William III, although it is now very out of date and unbalanced because of its focus on William. It was published without a bibliography, something of a serious omission from a “proper” historian. He took his own advice on publishing for the public only as far as one further book published in 1983.