Go the the next Companion Book published by Yale

Published by Yale as ‘Imprudent King: A New Life of Phillip II’. Although not in the Yale English Monarch series this book earns a mention in these pages even if Phillip II, King of Spain, is not generally considered a king of England. Nevertheless, he was the consort of Mary I and indeed her legislation made it an offence to suggest that he was not King of England. While to Phillip the reign in Spain was more important than in England, this is a vital study of his life in both countries because he had so many connections to and influences on England for not one but two queens - Mary and Elizabeth I.

These considerations make this an essential book for readers of the English Monarchs series studying the Tudor period. The author assembled this book after studying a remarkable find of over three thousand documents in New York City, untouched for four hundred years. How he managed to keep this book to under 500 pages is remarkable and truly it ought to have been twice the length. Professor Parker is a British historian whose speciality is Spanish and military history of the early modern era. He has published many books and journal articles on these topics, including an earlier (1978) biography of Phillip II, which he describes as a long essay. The significance of the subtitle of this work is evident.

Henry Kamen (then at University of Warwick - now retired) reviewed this book in Common Knowledge Volume 22, Issue 2, May 2016. "Readers will find in it not only a superbly informed narrative of Philip II’s long career as Europe’s most powerful king but also a highly negative interpretation of the king’s personality and policies. Parker considers Philip to have been directly responsible for everything that went wrong during his reign. In particular, he holds the king personally responsible for murder and mass bloodshed.”

Hugh Thomas writing in the Spectator (15 Nov. 2014) describes the book as "readable and broadminded, as well as being scholarly” and concludes that "Parker has given us a really magnificent biography, whose documentation is impeccable while never heavy...a masterpiece of historical biography and anyone who reads it will be enriched by it."

A delight awaits Spanish speakers. Planeta, Spain’s largest media publishing group, has published a Spanish version of this book. The Spanish edition was published in 2015 - the year after the Yale English language version. A hardback and Kindle is available at Amazon Spain.

This title has the honour of being the first book in our study of the English Monarchs series to have been released in an unabridged audio format. In October 2018 Trantor Media published both a CD (mp3 format) and a digital download. They are available in the UK and the USA. The cover art on the audio versions is the same as the Yale paper releases, although amended for the square CD case. The downloadable version was made available by digital media companies Audiobooks and Audible. The book is read, or "narrated" by Nigel Patterson. The duration of the audio is supposed to be eighteen hours.

Professor Parker's Philip II is not the first study of this king published by Yale. The first by Professor Henry Kamen (1936-  ), 'Philip of Spain', was released in 1997 but is now over twenty years old and is out of date due to the recent discovery of previously unknown documents (see above) which were available to Parker but not to Kamen. For this reason Geoffrey Parker's book is to be preferred. 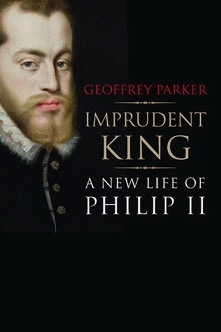 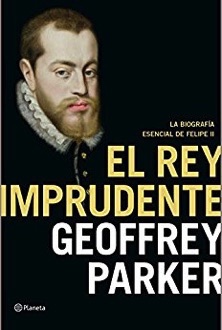 A video interview of the author discussing the book and his career can be seen in the player adjacent. If the video fails to play click here. In it you learn that Geoffrey Parker, in the course of his studies, set about to learn French, Spanish, Italian, Latin and Dutch. A daunting linguist and historian both. He is a pioneer of a new branch of historical studies - global history - and spent fourteen years researching and writing Global Crisis: War, Climate Change and Catastrophe in the Seventeenth Century (Yale, 2013). This book was named as the Sunday Times History Book of the Year.

Cover: The cover image could not be identified.