In a 2003 London Book Review (9 October 2003) of 'The Cradle King: A Life of James VI & I' by Alan Stewart, the English Monarchs author of the forthcoming 'Elizabeth I', Simon Adams, commented that James poses a problem for biographers which is the cause of few historians attempting the task: to what degree was he responsible for the collapse of the monarchy and the Civil War?; was he a prodigal king or did he inherit a broken down financial system from Elizabeth?; was the union of the kingdoms a success or a failure?

Adams nominates the biography by David Harris Willson (1956, Jonathan Cape) as the standard work which he says has not yet been superceded. Wilson's book is a problem, however. Recent scholars have rejected his negative views of James and have revised the general opion of this king. Professor John Cramsie (Associate Professor of History, Union College, Schenectady, New York) commented in a June 2003 review of biographies of James that "James VI & I has been thoroughly reassessed in the past twenty years. The obvious target was David Willson's toxic treatment in King James VI & I (Jonathan Cape; London, 1956)." In surveying several newish works on both James II and Elizabeth I on the Institute of Historical Research (University of London) 'History in Focus' book review website he concluded "The missing element in this revisionist project has been a full-length study of James capable of supplanting Willson." In this context then the attempt by Glenn Burgess would indeed have been a significant book and one frought with problematical issues.

This false start on a new biography of James IV & I is a setback for the series but the search continues for a new author to give the series a replacement for the David Mathew book.

A 1605 portrait of James attributed to John de Critz.

One of a number of similar paintings produced by John de Critz and his studio around 1605 and 1606, with small variations. It was used on the 1967 David Mathew book but given the Andy Warhol treatment. 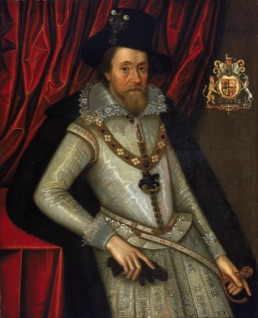 A new study of James was being prepared up to 2015 by Professor Glenn Burgess of the University of Hull (1961- ) but it did not progress to publication stage. Notes from as long ago as 2009 at his university advised it was being researched and was to be published by Yale. This note was removed during 2015 when work on his book ceased.

In anticipation of the release of this book Amazon USA has an entry for this title including an ISBN - 9780300119206 - with a publication date of September 2016. Amazon UK had an even earlier date of June 2013. These pages remain active (in May 2022) but the book has been discontinued.

At about that time Yale UK posted a now discontinued webpage in their online catalogue with the basic publication details (including 448 pages) and a statement that it was to be an English Monarchs title, but without a date.

Professor Burgess has been at the University of Hull since 1994, but born and educated in New Zealand. He is a Fellow of the Royal Historical Society and already has written many titles in this area of study.

A reader of this website in Los Angeles (thanks Lynne) advised that Professor Burgess had a series of promotions in recent years and has served as the Deputy Vice Chancellor at the University of Hull. His dates of promotion slightly preceded the removal of the 2015 note that the book was being researched. This may indicate that work on the book may have been delayed and ultimately terminated in favour of Professor Burgess’ academic duties. A new note on his University of Hull webpage observes that he ceased to be Deputy Vice Chancellor in August 2019. The site also comments that his current project was the political thought of George Orwell, and makes no mention of a biography of James.

Professor Burgess is the author of one Yale book so far: 'Absolute Monarchy and the Stuart Constitution' (1996) ISBN 9780300065329. A summary of the book can be found at this link on the Yale website.