◀Go back one king      Go forward to Oliver Cromwell ►

Detour to Louis XIII of France

There has never been any mention in a Methuen or Yale book that titles might be expected on the two King Charles. They await a Yale author. The entries for the two Charles are here to note the gap in the sequence of the English Monarchs books, and to offer some alternatives for discerning readers of the series. While there is no English Monarchs series book for Charles I, there are two titles which almost qualify for our ‘Companion Book’ sub-series.

Almost, but not quite:

'King Charles I' by Pauline Gregg (J.M. Dent*, 1981 (UK release) / University of California Press, 1984 (USA release) could almost be considered as a Companion Book because its North American publisher, University of California Press, was the distributor in that territory up to the 1992 English Monarchs book Henry V, after which Yale published all the new books in both territories. Had Charles I been published in the UK by Methuen it would have easily been a ‘Companion Book’ but as Methuen in London were firmly in charge of the series in 1981 we must discount the J.M. Dent published Charles I by Pauline Gregg. C.V. Wedgwood, a key historian of the period, praised this account of Charles I. It remains the closest match to an English Monarchs title of any biography of Charles I and therefore this site recommends that title over any other.

'The Personal Rule of Charles I' (1992) by Kevin Sharpe is a Yale title but not a biography of the king or the reign. It does not fit the template for an English Monarchs political biography, yet is an important if controversial study of the period. David Underdown of Yale University, writing in The Journal of Modern History, Vol. 68, No. 1 (March 1996) found this book lacking in theoretical framework yet overburdened by factual detail. He asks why the author thought it “…necessary only to restate the facts, with relentless detail piled on relentless detail.” Sharpe’s purpose, he comments, “…is to reevaluate the Personal Rule [of the king] in the light of recent work by "revisionist" historians of seventeenth century England. …he argues that the Personal Rule was not the "eleven years' tyranny" of Whig mythology and had little to do with the subsequent lurch into Civil War in the 1640s. It was, he says, a period of remarkable tranquillity.” Underdown finds this unconvincing. The book, therefore, is an examination of the rule of Charles I and not a political biography, giving it a different flavour and intent when compared to an English Monarchs title. Furthermore, this is a title for Stuart specialists and those already familiar with the minute detail of the reign and the conflicts during the period. This is not a book to offer to the ‘widest possible readership’ which is part of Yale’s brief for English Monarchs books. Therefore this does not meet the requirements of a ‘Companion’ book.

Some alternatives for reading on Charles I are:

• 'Charles I' by Christopher Hibbert (Weidenfeld & Nicolson, 1968 with later printings). A popular history of the period, especially useful for those entering the era.

• 'Charles I: A political life' by Richard Cust (Routledge, 2007). Johann Sommerville (University of Wisconsin, Madison) reviewed this book in The American Historical Review, Vol. 112, No. 3 (June 2007). He found that Cust had written a solid academic account of Charles but was not convincing in his argument that Charles has been too harshly judged by historians. “The argument is valiantly conducted but not always wholly convincing…for the evidence presented strongly suggests that if Charles was not totally incompetent, he was very far from being conspicuously competent."

*The J.M. Dent imprint was purchased in 1988 by Weidenfeld & Nicolson. Later British printings of the Pauline Gregg biography of Charles I will bear this imprint rather than the Dent imprint.

King Charles I by Daniel Mytens, held by the National Portrait Gallery, London. 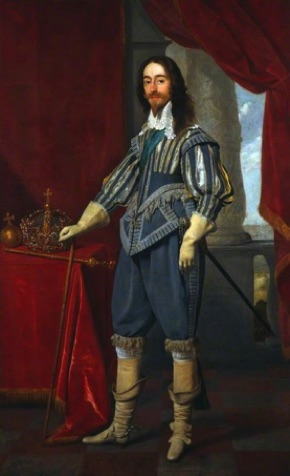 Candidate as a substitute:

Buy the Pauline Gregg Charles I book from Amazon

Buy the Kevin Sharpe Charles I book from Amazon

Buy the Christopher Hibbert Charles I book from Amazon

Buy the Richard Cust Charles I book from Amazon

Cromwell and the Commonwealth

Buy 'Cromwell Our Chief of Men' from Amazon